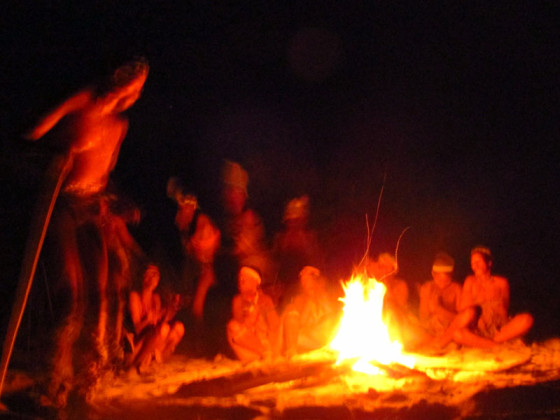 The Trance Dance… under the skies of the Kalahari

The rhythmic hand clapping and nasal singing of the seven women almost mesmerized me, as we sat just outside the circle that had been stamped into the sand. Three other men were part of the dance, and they followed the circle around the women and the fire. The fire burned effortlessly, the darting flames leapt and swayed independently of this age-old song that summoned the spirits of the Basarwa, to this trance-dance.  The sands of the Kalahari have witnessed this ancient healing ritual for a thousand years, and the milky way arched over us in silent witness.

Khi! Lead the dance, as was expected as he was the eldest of the clan and by that he had weathered many, many seasons under the Kalahari, and survived to be successful, and had the most experience of the males present. He was the ‘shaman’ of the group. His lean, leathery body was backlit by the fire as he stamped and shuffled past me, the rattles on his skinny legs shaking and adding a grassy sound to the monotonous clapping of the women. His body pulsed with a rhythm of its’ own, the result of his deep breathing and exertion. His ‘apprentice’ was a young man who followed closely behind the old man, ready to catch him and prevent him falling in the fire, a certainty when the spirits entered the body of the shaman.

The dance had been going on for at least 20 minutes, when suddenly the old man started to shake feverishly and call out in a strange voice to the sky. He staggered out of the circle, into the women huddled together, their faces coppery in the firelight. Falling to his knees he swayed dangerously towards the fire and would have fallen in if his young helper had not wrapped his long arms around him and pulled him back. The voices of the women were loud and soothing, contrasting with Khi!’s falcetto jabber, and the deeper tone of the ‘helper’. He was helped to his feet, his eyes open and he started the ‘healing’.

He put his hands on the women, one at a time and not in sequence. First a young women, her naked breasts swung forward in the light, heavy with milk for her baby… she had been having problems with her stomach since the birth. Khi! placed his hands on her head, and prayed over her, she rocked backwards and forwards, crooning under his touch… next another… an older woman. Khi! repeated the actions, all the time talking and praying… pausing here and turning back, and repeating the prayer.

As western visitors we had been invited to attend this sacred ritual, and sat quietly under a tree on the edge of the circle. Khi! was ‘in the spirit’. He stamped and swayed, all the time driven by the chanting song and clapping of the women.

He crabbed out of the circle and approached one of the white women sitting to one side, placing his hands on her shoulder and praying over her, shaking. She sat quietly, eyes closed and received his prayer… a silent tear slid down her pale cheeks, a glittering pathway in the firelight. Khi! came back to her, and repeated his prayer, this time more urgently, holding her firmly and shaking her gently. Suddenly, she wept openly and put her hands to her face. The shaman moved away and touched me.

His hands brushed my head, and paused there…

I listened and waited. I have had back problems for a while, the result of carrying too many heavy packs and camera bags over the years, and I received his prayer of healing for these.  I waited… the sounds of the night insistent in my ears, but strangely muted by my expectation.  His hand lifted and was gone to another guest a short distance away.

Suddenly Khi!’s apprentice staggered and walked off into the dark, away from the fire. One of the other men in the circle dashed off after him, and gently restrained him, leading him back into the light, to safety.  He had also been touched by ‘the spirit’. He crawled towards the fire, and was deviated by the men. They held him away and talked to him, calming him.

Khi! had returned to the fire circle now and his rheumy eyes were streaked with tears as he stamped and sang to the clapping hands. The mood was somber and the shaman and the other two men stamped and rattled in a continuous circle of shadowed movement.

The healing was not over, but our time was and we rose quietly and moved away back to our world and the tents beneath the palms.

The dance went on until the dawn glow in the sky and the jackals song was starting again across the whispering plains of the Kalahari.

I don’t have back-pain any more. 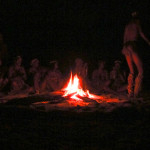 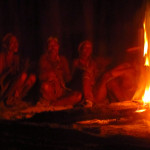 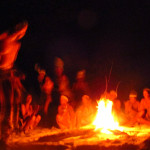 Mana Pools: One of Zimbabwe’s gems. →