Comments Off on The endless plains..in search of wildlife…. 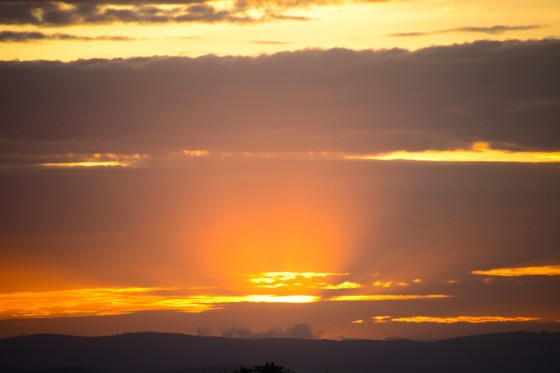 The endless plains..in search of wildlife….

We drove for 12 hours today…Stephen, our driver/guide did, that is. We set off east to the distant escarpment, then turned north to the Kenya border, then west by south.  We disturbed a male Black backed jackal not far from camp with the remains of a young common duiker.  he trotted off with his trophy looking very pleased with himself. Along the ‘way’ we found a male cheetah just resting under a thorn tree, quite content, his long clubbed tail made wide sweeps over his spotted form reaching his cheek, effectively chasing the small flies that bothered him. We left him after a few minutes to his solitude.

Several herds of elephants and a goodly herd of buffalo were added to the ‘list’ before we came upon a significant herd of wildebeest. Possibly three thousand animals in all, a generous estimate but at least it was something representing the species as there was nothing else to be seen of the migration! We watched the animals doing what they have always done and then moved on towards the hills. Although we drove over many lovely plains and low rolling ridges, not a single wildebeest showed itself. 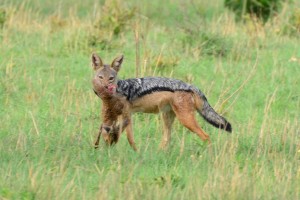 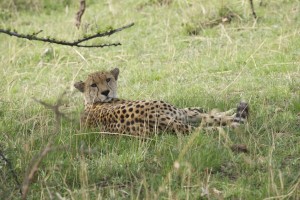 After turning north and passing the old border gate at Bolongonja  then suddenly we started to encounter smallish herds of wildebeest, mixed with Plains zebra, eland, giraffe, elephant and topi. Scattered herds of graceful impala inhabited the thorn stands, giving a beige and pink blend to the woodlands.

Suddenly herds were visible all the time at various points along the hills and ridges. I breathed a sigh of relief…..there HAD to be wildebeest somewhere! We had lunch under a spreading tree on a hillside with views over possibly 50 000km sq. of virgin parks land and it was good.   Several busy squadrons of small ‘hover flies’ created a back drop hum to lunch that was very noticeable, and added to the ambience of our spot.  We decended to the Sand river, and came upon a fresh wildebeest carcase at a spring. It had been opened but nothing was showing itself, so we left it.   Further along the views over Kenya started to get our attention for their depth and beauty.  A huge storm cloud and rain evolved  on the Kenyan side, and eventually engulfed the Tanzanian side in the evening.

Suddenly another game drive car was parked in front of us….and…..there was an adult cheetah, perched on the top of a large termite mound.  What a sight!!  We then noticed a small head further along on the edge of a gulley, and as we pulled in for a photograph, she jumped down and walked away. Two yearling cheetah emerged and followed ‘mum’.  What a sequence of events and photographs.

They were all in tip top condition.

← Serengeti…..or bust!
Elephants on the rocks? →