Comments Off on The Dunes, oh those dunes. 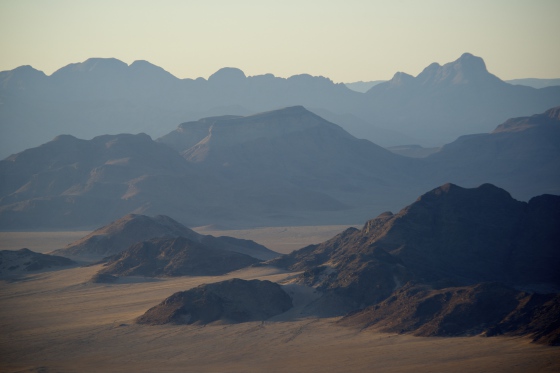 The Dunes, oh those dunes.

Namib Naukluft is a unique and well known destination in Namibia. The flight down there from Windhoek gives enough of an over view of the country to know that life is not easy for any person or creature to exist there. When the aircraft bears west over the rocky, layered escarpment and heads towards the gravel plains, the pink layer of the horizon is an anomaly. Until you land and realize the dunes ARE the pink layer.   The dunes vary in color according the quantity of certain oxides, the sun’s angle and location.   The wind continually dresses the dune bases, so the sand is always firm against the ‘foot’ of the dune, and not spread haphazardly across the gravel plain. 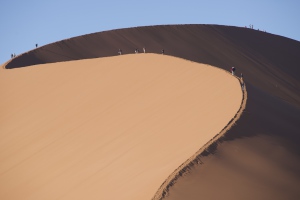 Dune 45. Traveled by many, and remembered by everyone who walks them. 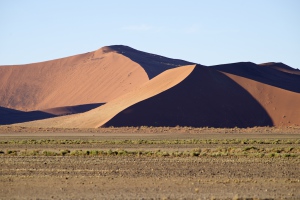 Sculptured by wind, and coloured by light.

The dune field is immense, in fact this is the edge of the Namib Desert, THE oldest in the world! Dune 45 is accessible to the public, and is constantly being traversed, as is the big dune overlooking the Dead Vlei. So I took my guests off to a special dune which we climbed, completely alone.

We enjoyed the privilege of discovering minute and intricate life on the sand fields which is not possible on the public dunes, because of the constant human presence. Web footed gecko’s, a spider…possibly a White Lady dune spider which cartwheels away from its’ enemies, several beetles had scuttled from grass tuft to tuft leaving parallel marks in the sand, and a chameleon had stalked something and having caught it, paused and then stalked away into the grassy area. The almost serpentine raised and continuous mound made by a golden mole snaked across the lower basin between small ridges. In the far distance two oryx grazed on the sides of a huge dune amongst the grassy tufts.  We labored on leaving footprints and nothing else on the surface……the wind would be my friend and erase them by nightfall.

Ballooning is a fine way to see into the Namib for several kilometers, apart from a different perspective on the nearest dunes. 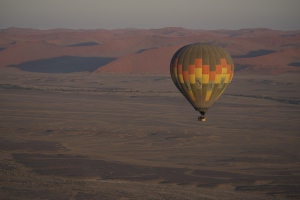 Early morning flights see the sunrise over the Etendeka mountains. 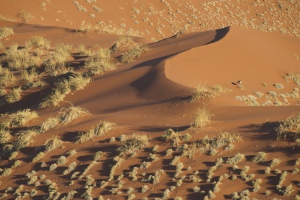 The grass on the dunes is food and home to many creatures, from Dune larks to beetles.

The light throws different shadows over the mountains just before sunrise, which we loved. Down below the ground crews were watching and listening to the pilot to ensure they were on hand when we eventually touched down.  What could be nicer than a champagne breakfast in the gravel plains with mountains of rock millions of years old as companions.  That afternoon we mounted quad bikes and visited some of the closer hills and sandy places before heading home in the twilight. 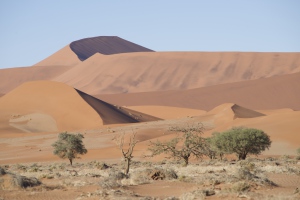 This was the unspoiled dune we climbed, confident that our fleeting presence would not leave a scar.