Comments Off on Lewa Safari Camp 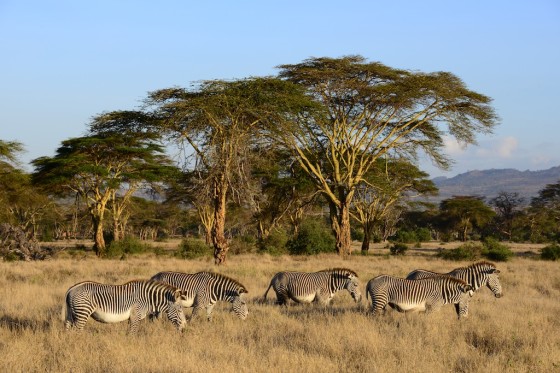 Up the next morning and away we went. Two of the group decided to stay behind with a mix of ‘needing to recover still’ and a brief tummy upset. So, we took off into the expectant morning with the air fresh and the day ahead full of surprises. Spotted hyenas returning home after a night’s hunting. Not commonly seen here, and so we followed them to a waterhole where they slopped around noisily, getting their fill and then lay in the mud briefly. A herd of zebra watched them warily from a short way off.  A herd of Cape Buffalo wandered in and took over the waterhole and the muddy area around the pan too.  We carried on.

A picnic breakfast had been set up for us on a hilltop…..what a view!

Giraffe, elephant, gazelles, oryx, zebra and some great birds filled our morning well…….and the most unusual of all….the bright blue scrotum and red willy of a male vervet monkey!  This attracted a LOT of mirth and ribald comment.  The poor chap was quite taken aback with all the photography.  Another surprise was a female cheetah with her 8 month old cub!

Back at camp a fabulous lunch was served in the ‘pool house’, amidst superb starlings, weavers and a cloud of doves. They all had their own ‘table’ set way away from us humans, but they were fun to watch. 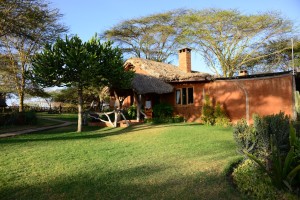 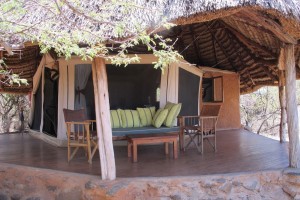 Tea was at 3.30pm, and then set off again.  Black rhino with a calf and then the biggest herd of Grevy’s zebra AND Common zebra feeding in the same proximity but with towering fever trees as a back ground!!  The afternoon light was gilding on this picture and we enjoyed it to the max.  After a gentle drive through the forest we stopped for a sundowner with a steel-blue gray sky, and a hadeda ibis silhouette.

Nightjars flitted across the road on the way back, and as we approached camp seven lions appeared in the headlights gamboling and chasing eachother across the dusty track into the grass on the left….fading into the night like dust in the wind. A green eye glowed briefly in my small flash light and the shapes were gone. All was quiet.

Comments Off on Off to the Bush…thank goodness. 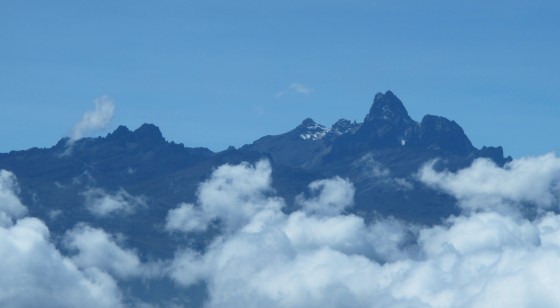 Off to the Bush…thank goodness.

We left Nairobi behind, grateful for the fun time we had enjoyed the previous day, but thankful for the safari still waiting to unfurl.

We made it to the Wilson Airport in 20 minutes! Surely a record!

Checking in was easy…….paying for our extra luggage weight was painful.

After a minor panic, because Linda had mislaid her passport, we were eventually called for our flight and we lifted into a cloudy sea and headed north. Mount Kenya appeared above the cotton wool after 35 minutes or so, and we collected some interesting images of the mountain, with a tiny smear of snow near the twin peaks. 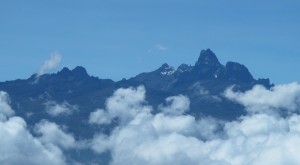 Breaking through the clouds were banked over a brown grassy landscape, with two patches of evergreen reeds and yellow fever trees. A herd of buffalo were scattered through the thorny woodland and two giraffe appeared like dinosaurs waving their long necks in a solemn dance as they browsed on a red trunked acacia bush.

What an amazing day! The sun shone and a cool breeze stirred our hair as we stood in line for the ‘loo’. Grevys’ and Common zebra grazed together nearby, reticulated (or ‘matriculated) giraffe browsed amongst them, Grants gazelles stood militarily to attention watching us suspiciously and a vortex of vultures spun in a slow motion of power against the sky. Alex, our driver guide greeted us all first, and gave us a quick briefing on the reserve and our next hours journey to camp.  Camp was ‘Lewa Safari Camp’, located on the edge of a steep re-entrant facing north towards Samburu, amidst Acacia sayal and some broadleaf  woodlands. 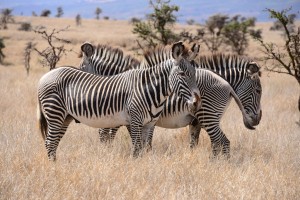 Lunch was by the pool, and after a short siesta we set off to find something interesting!  Black and white rhino, lions with cubs and of course more zebra and gazelles.  What an afternoon!!