Comments Off on Zimbabwe first stop…Land of the Giants! 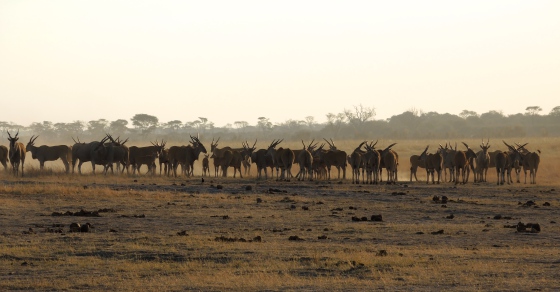 Zimbabwe first stop…Land of the Giants!

Bulawayo receded into the smoke-hazed distance as the Pilatus climbed steadily to a safe 20 000 feet, above the layer of brown haze thickened by the seasonal bush fires that proliferate in July and August.

The patchwork subsistence cultivation patterned the dry bush below us and we dozed in companiable silence. I glanced out of the oval window and recognized some of the local landmarks of this national park, which is an area the size of Wales. The waterholes that lay like carelessly scattered coins across the bush had tiny dark dots clustered around the edges…..I smiled as I recognized them for what they were….elephants!  I leant forward and tapped one of the ladies on the knee as she dozed…’Hey Diane, we have your first elephants..’. Immediately, her eyes sprung open and she peered out of the window.

We spent three nights at Little Makololo, and saw possibly 1000 elephants in that time!

We also saw a respectable number of other herbivores and carnivores as well, but first, let’s land and drive to camp. The aircraft flared and landed perfectly, the bumpy runway announced a Zimbabwe touch-down. The pilot had thoughtfully banked over a waterhole on the approach, exposing about sixty elephants drinking there! The first antelope we saw were a goodly herd of eland which skittered off a short distance as we slowly approached, the elephants ignored the vehicles as they drank and pushed and squealed at the round concrete trough. Matriarch and calves at a waterhol

I looked around at the faces in both vehicles…..a rewarding sea of smiles and excitement. I sighed happily….THIS was going to be good! 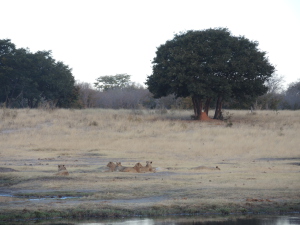 Lolling, replete lions ignored us as we drove by.

We spotted a group of lions at the next waterhole en route to camp. They lay replete, confident and ignored us too…later we discovered they were full of sable meat. A female by the look of the mane we found in the bush.  Whilst we watched the lions in awe, a large roan came strolling warily out of the bush and immediately spotted the lions. He stared fixedly at the cats, and then trotted off a distance before turning briefly once again to stare at the lolling lions. 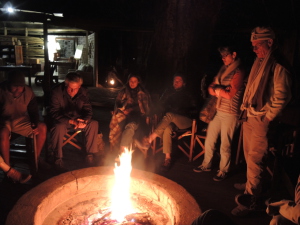 The warmth and soft glow of the fire…..

The campfire held us all in its soft glow that evening, as the temperatures slid down the scale to minus 2C!