Comments Off on Second day in heaven…. 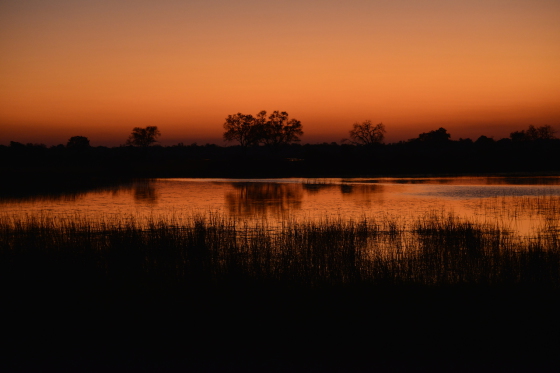 The sunrise was startling in its’ intensity, color and beauty…….’Is it always like this?’  “Just about,” I answered from behind my camera. Breakfast was nearly forfeited in our haste to capture the sunrise, with the wings of the flocks of Burchell’s starlings making piping sounds as they headed east to tall stands of fruiting jackal berry trees.  A hyena called from a distance, and hippo snorts sounded off to the south of the camp.  Baboons screamed and performed as we left the camp area, ‘Domestic Violence’ I think, and we watched their antics with amusement. The little ones are cute. 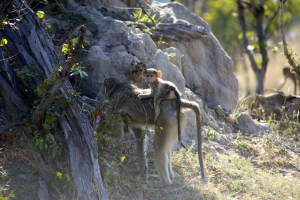 The little ones are cute.

Hyenas, leopard with cubs (again) and a myriad other wonderful creatures scored a wonderful ten for us this morning. Tea with the Family and fun with the guides was all part of it. It was an outstanding morning and we returned to camp eventually, hungry and chatty, pausing along the way to watch and photograph a bull elephant on his own as he threw muddy water all over himself. 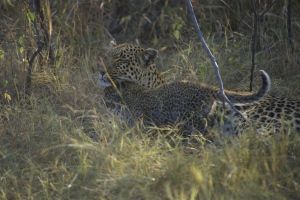 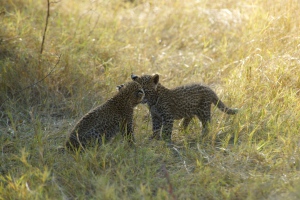 That afternoon we found a pack of Painted dogs resting in the late afternoon shade. They blended in so well amongst the coppiced mopane that it took some of the my guests a minute or two before they could clearly see them individually amongst the dappled shade and autumnal leaves.  We stayed until the dogs woke up, yawned restlessly and finally went into their peculiar greeting frenzy, whining, defecating, licking each others muzzles in a submissive pose and generally ran around each other, their white-tipped tails held high. Eventually, the lead dog took off trotting determinedly through the mopane the others in a line behind it. Every antelope and warthogs night mare! 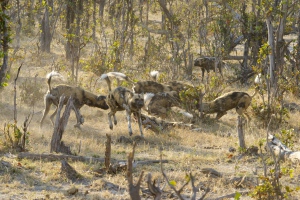 The pack whirled around each other in a greeting frenzy before heading off to hunt.

We followed them as far as we could , eventually losing them in the tall grass and dense stands of Kalahari Apple leaf trees. Their dappled, blotched forms melted into the bush like they belonged there, as they do. We wished them well and headed for home and brunch.

← Another First from Greenville!
Charging hippo before tea….what more, I asked myself. →