The below Milestones is in the Rovos Rail Tribune. 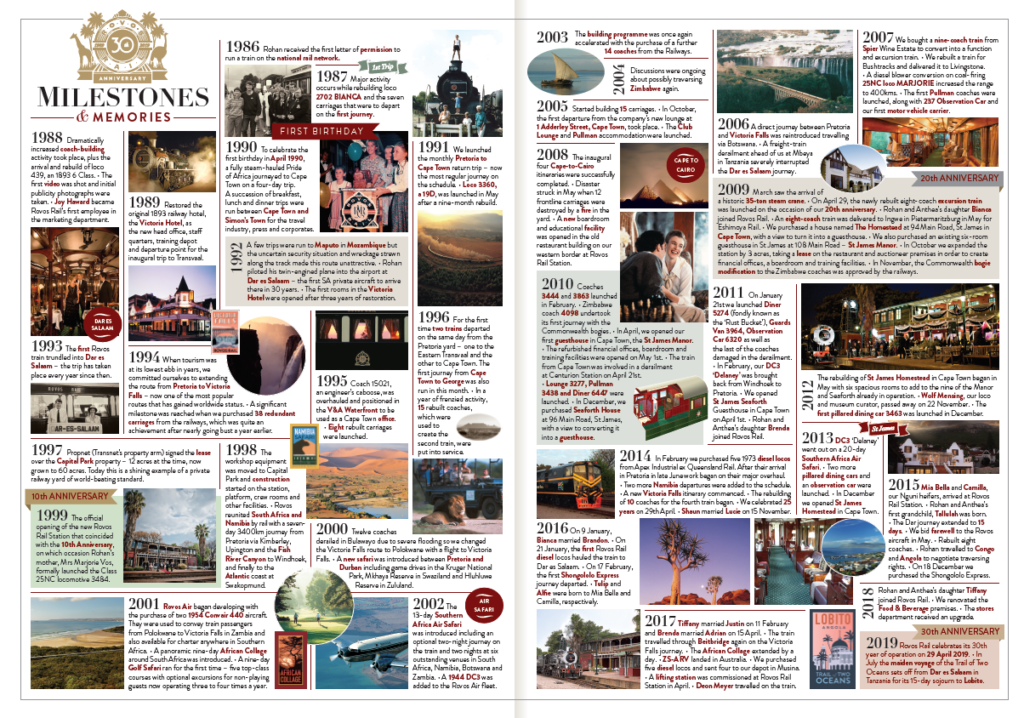 Since its first overnight journey with a seven-coach train to what was then the Eastern Transvaal, Rovos Rail has expanded exponentially and now offers eight trips around Southern Africa with more trains that can accommodate 72 passengers. Journeys range from 48 hours to 15 days with the newest route, Trail of Two Oceans, departing for its maiden voyage in July this year from Dar es Salaam to Lobito in Angola. It will be the first time in history that a passenger train will travel the east-to-west copper trail.

“Our new route coincides nicely with our 30th birthday. I’d like to say it was planned but I can’t take credit for the serendipitous timing,” says Rohan Vos, owner and CEO of Rovos Rail Tours. 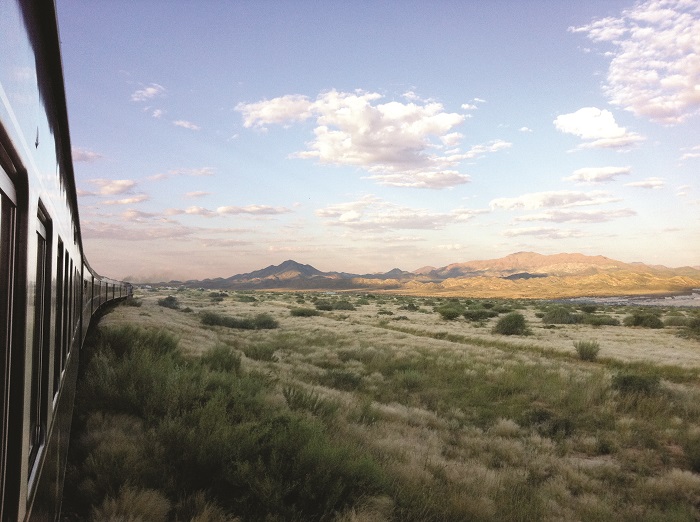 Also in the Rovos fleet is the Shongololo Express that was purchased and renovated in 2016. Three journeys are on offer ranging from 12 to 15 days with the train travelling for over 300 days of the year. “That train just goes and goes with very few issues – mostly I think due to the relaxed itineraries. It’s quite amazing,” comments Vos.

Asked if he ever thought Rovos Rail would progress this far, Vos responds: “Not at all. We lost so much money in the early days and we knew nothing about hospitality. In my naivety I believed what we were offering was so unique that tickets would sell easily. Boy, was I mistaken.”

With his wife Anthea at his side, Vos travelled the world attending travel shows and calling on leading travel agents and tour operators. “It was both invigorating and exhausting,” says Anthea. “We were starting out at the same time as the Vartys from Londolozi and the late Liz McGrath as well as a few others. We all used to lose our voices from punting our offerings so vigorously!”

It took a decade for the company to break-even. “We managed to side-step bankruptcy more than once,” says Vos. “I was inexperienced and had no idea just how expensive trains would be to operate.”

An auspicious moment arrived in 1993 when Vos formed a relationship with Phillip Morrell from Jules Verne in the United Kingdom. Together they plotted a route from Cape Town to Victoria Falls. “We had no money at the time for any advertising but we placed an ad in the Sunday Telegraph nonetheless. It was December and I didn’t hold much hope.” However, much to his surprise, the advertisement worked and the maiden voyage sold out. When Phillip called to share the good news, Vos’s words to him were: “Send cash!” The new Victoria Falls journey proved successful.

When Rovos Rail did eventually start making some headway, the company – like many others – was impacted by events such as a volcanic ash cloud, airline strikes, the Ebola outbreak and a crippling global recession.“It’s certainly been a challenging and interesting ride but one has to play to one’s strengths and luckily I thrive under pressure and I’m a good crisis manager. I also don’t like being told I can’t do something,” he smiles. 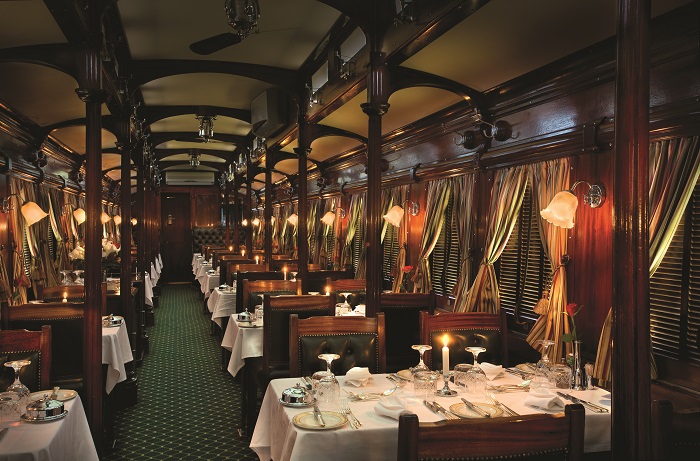 There is a great deal that Vos would like to say about local politics and how it affects his business on a weekly basis but, in short: “The railway infrastructure on which we are 100% reliant needs attention to enable our services to run efficiently. We have procured our own electric and diesel locomotives so that one day we may become independent of Transnet in this department. Our goal is to be as self-reliant as possible,” says Vos.

The business now employs 440 staff members at Rovos Rail Station, the impressive private railway station and headquarters in Pretoria. In 1999, the derelict 60-acre property was rehabilitated and renovated to become the home of everything from the on-site laundry and kitchen to the locomotive and coach maintenance workshops, reservations and the finance department. “We also have our own little museum that pays homage to our 30 years of operation and also South Africa’s railway history,” says Vos.A sixth train set is in production with completion aimed for December 2019. This means that the company will be able to have five Rovos Rail trains out at once on any of the eight journeys it offers along with Shongololo Express running on one of its three trips. 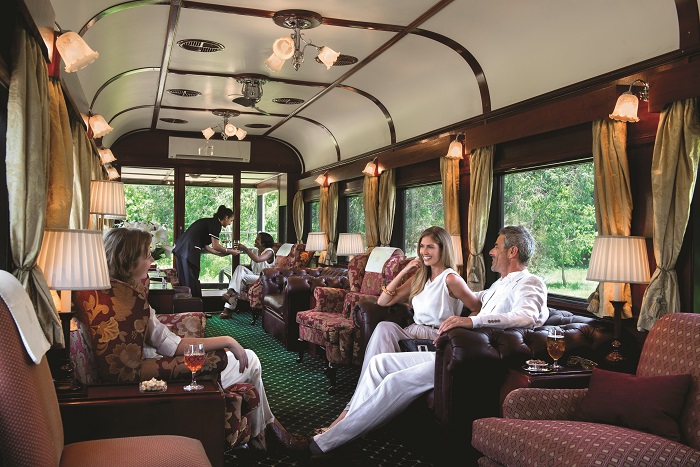 What’s next for Rovos Rail? “Consolidation,” says Vos. “Once we’ve launched our sixth train we need to focus on maintaining all the coaches, training staff and persevering in our pursuit to be independent,” he adds. “Our daughters are also actively involved in the business and I imagine there will be significant change over the next few years as they work with me to propel us forward.”

The company also has long-standing, amicable and prosperous relationships with many travel agents and tour operators around the world. “Without them we would not be here so I feel this is as much their celebration as it is ours,” says Vos.

Like many in the hospitality industry, Rovos Rail has had to weather its fair share of turbulence and even though the company has grown substantially, the determined and family-orientated spirit that started the business 30 years ago is still very much at its core. “We have staff members here who have been with us since the beginning and over 100 employees who’ve been here for over 20 years,” says Vos. “It’s quite incredible and unheard of these days so for this I am truly thankful,” he smiles. 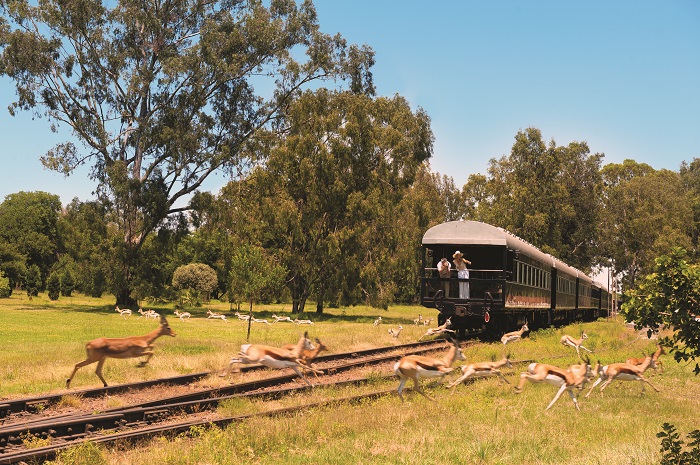