Comments Off on Photographic moments from the trip… 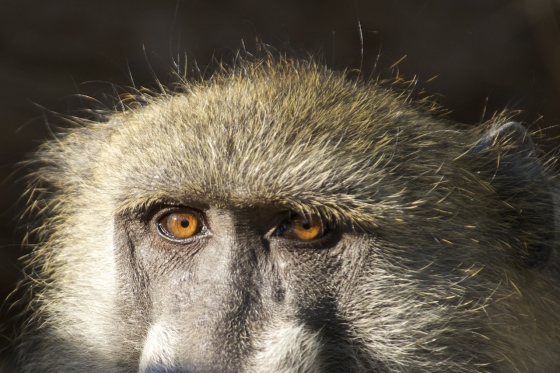 Photographic moments from the trip…

During any safari there are opportunities, most of them unexpected mind you, when whoever has a camera handy captures a particular image that is ‘notable’.

I have been very fortunate to spend more time than many people in the field, and therefore have learnt to have my camera handy in most situations. These are a few images from this last safari, and of course each image carries a short story! I have enlarged some of these in order to get the most effect from each image, as that is how I imagined the picture to be when I captured it, given the limitations of equipment!

Sunsets are always a great end to any day, and its a part of every safari to celebrate, normally with some crisp, beverage!  As our dry season progresses the accumulation of smoke and dust in the atmosphere creates conditions for lovely red sunset colors. Over water of any large surface area, the golden pathway looks wonderful. We had been watching a herd of buffalo grazing peacefully on Sedudu island, and were chugging quietly away towards the wider channel to head home, when I took a few pictures of the sunset, and was helping one of the family adjust their camera, when I heard a skimmer. Grabbing my camera I scanned the water for the bird and managed to capture one as it flew rapidly through the tail of light on the water…Bingo, just got it. 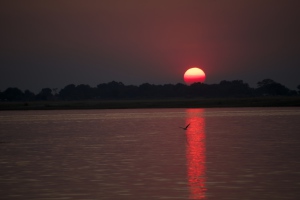 I did not manage to look at the image, and was more concerned that my guests captured some of the ‘show’ and only later saw what I had in the camera. Fabulous.

As we finished our drinks and were heading up the channel, another speed boat crossed our bows several hundred yards ahead of us and I managed to get several cameras lined up on it’s progress…..success, some great results.   We toasted our success and a terrific safari to boot, as this was our final night in the bush, so to say, as we left for the Falls on the next day. 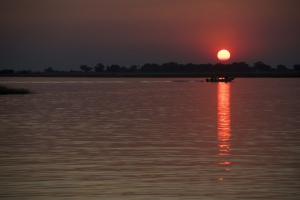 We still had some minutes to go before we landed and so I changed my settings to ‘tungsten’ and shot another ‘keeper’, as the tungsten setting lends a lovely blue to any image with bright light or sky area.

It looks great and I was very happy with the result. 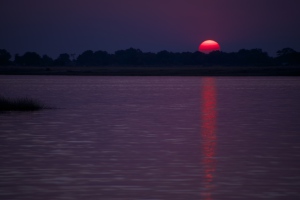 However, not all these images are about sunsets, but some came from some of the drives we did in the early part of our safari.  One morning a troop of baboons had been coming down out of the trees where they had been roosting the previous night, and there was the usual screams, barks and hectic chasing of each other as young males bullied females and some older males reasserted themselves in the male hierarchy. It was a little hectic, and as we drove slowly through the scene, the rank stench of their roost site wafted over us and we moved more quickly past the trees. A short way further on we were parked watching waterbuck and impala on a flood plain, when a slight scuffling sound next to me made me look around, and there next to the vehicle was a large baboon sitting quietly in the lee of a dead log. Clearly this fellow was taking time out and resting. He sniffed and licked a front ‘hand’, a small wound from a scuffle perhaps. I swung the camera around slowly, focused on his face, and as he looked at me, pressed the shutter button twice. Moved the camera off his face. I didn’t want him to feel uncomfortable with the lens in his face. He sat there for a while longer before loping off to rejoin the cohort of males to one side of the scattered troop. His likeness captured forever….amazing.

Not long after this close encounter, we found the drag mark made by a leopard who had killed an antelope (an impala?) and dragged it 50 yards down the slope to a large, dense Capparis bush and was hidden away in its depths, way out of the view of trespassing humans or baboons.  We scanned the bush minutely hoping to catch a glimpse of this wary cat, the prince of predators, to no avail. Moving on we passed kudu, impala and elephants coming down to the river. A herd of impala were feeding in the taller grass of an island, and we had spotted a few puku amongst them and I was pointing these quaint antelope out to the family and highlighting the differences between them and the impala. Out of the corner of my eye, I was aware of something bouncing on a grass stem near the car. It was a beautiful Little bee eater. Eyes alert and head twitching this way and that as it looked for small insects to hawk it was a pure gem. I managed to collect a few images before it trilled and flicked away on pert wings, to snap something and drifted to rest on a small branch well away from us. 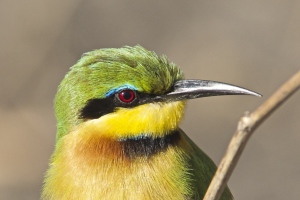 Some will say sunsets are so cliched now but I would differ.  Capturing a sunset is an art, even with the ‘Auto’ setting on our cameras and iPhones or whatever we carry. Normally it is associated with an event of sorts or a group of people or family and evokes a fond remembrance.

Capturing any image that pleases us (the photographer) is an achievement of satisfaction, something harmless and non-invasive too…that satisfies a hidden part of each one of us…..a trophy of sorts.

So, if you are coming on safari make sure you have some way of taking a small part of your experiences home with you………….you will regret it if you don’t!

← Charging hippo before tea….what more, I asked myself.
Zimbabwe first stop…Land of the Giants! →