Comments Off on Namibia…not for ‘First-timers’, but a wonderful country 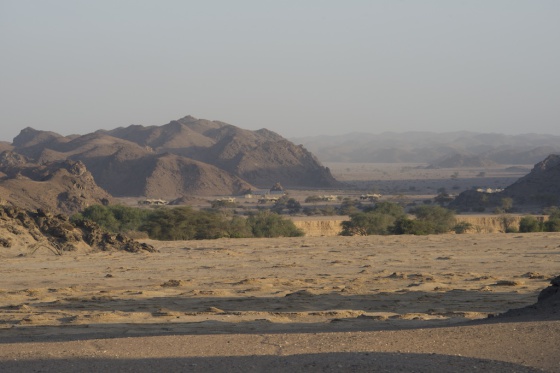 Namibia…not for ‘First-timers’, but a wonderful country

Sam and her family had not been to Namibia before, but were seasoned Africa travellers. We had created an itinerary that would give them a piece of several locations, from the Namib-Naukluft in the middle south to the banks of the far north, the Cunene river. Flying is the quickest way to move between locations, and one sees the country from a wider perspective in a shorter period. It has the most spectacular topography, and variety of habitats too.  The order of the camps was atypical due to last minute arrangements and availability. 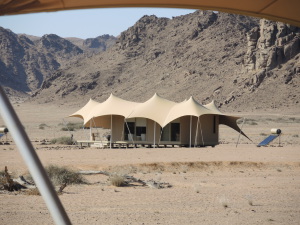 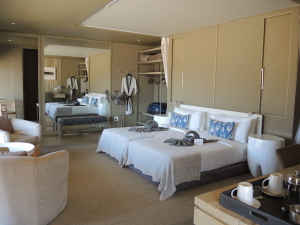 Large, spacious tents, en suite with a fan and large windows for ventilation, and floor to ceiling glass in front.

Hoanib Camp, near the river of the same name was first, and was a fine start to our trip! Recently opened, it is located in the rocky hillocks east of the Skeleton Coast Park boundary only a few hours drive from the Atlantic waves and fur seal colonies. En route you may see Desert adapted elephants, giraffe, oryx, springbok and if you are REALLY lucky, lions on the dunes. The Hoanib flood plain is also home to rare birds like Black harrier, Peregrine falcons and others who seem to have strayed out of their accepted distribution range. 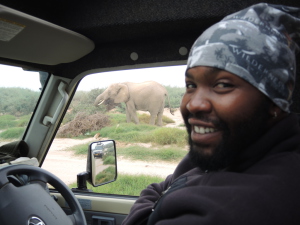 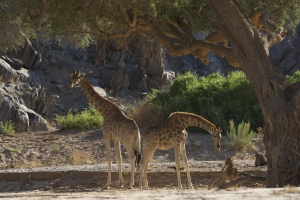 Even though the camp is 50 odd kilometres from the coast, the famous ‘sea fog’ penetrates this far, bringing the fresh water to plants and insects that rely on its’ gray, silent cloud for survival.  We experienced this blanket, and drove off from camp in a thick fog towards the river en route to the coast. The silence that comes with it is as profound as its effect. It normally retreats reluctantly as the sun rises so that by 1100am it is back over the sea, and gradually dissipates over the waves. 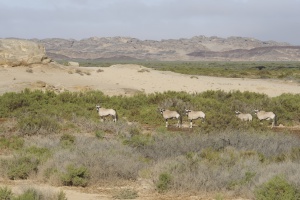 These beautiful handsome antelope are common in most of Namibia. 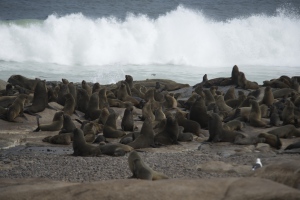 Several thousand seals are found along this coast.

We set up lunch on the beach, not far from a rusted wreck lying amongst the rocks of its destruction, with the Atlantic waves our companions. After lunch we drove back to the airstrip close by and flew back to camp. 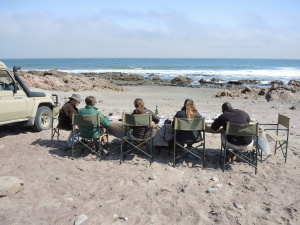 Lunch on the beach with the waves and gulls.