Comments Off on Mana Pools: One of Zimbabwe’s gems. 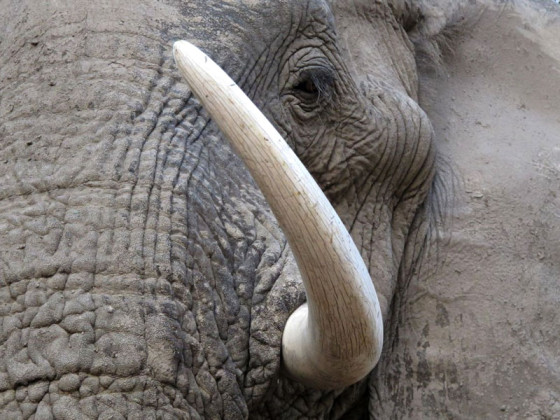 Mana Pools: One of Zimbabwe’s gems.

Mana Pools National Park is a World Heritage Site, located on the Zambezi river, opposite the Lower Zambezi National Park, in Zambia.  This wonderful park is one of the only national parks where casual visitors are allowed to walk about in the park at their own risk.

The best known area of the park is the flood plain, which is surrounded by a gravel road allowing sedentary travelers an opportunity to see great wildlife from their vehicles, and draw off at various points to watch particular points of interest, such as a hippo pool or a section of the Zambezi.

There are a number of camping sites, apart from the main one at Nyamepi, and these all have to be booked at Central booking office in Harare.

So, travelling with a group of guests who had agreed to accompany me to Zimbabwe and Botswana on a wildlife safari, I had booked a camp with an old friend of mine, Stretch Ferreira, who runs a very fine tented camp on the banks of the Zambezi.

I am a professional guide and was one of the privileged few in the 1980’s who experienced canoeing the Zambezi when it was a new and exciting activity, AND walked with black rhino wandering around on the flood plain.  I had returned to share this wonderful area with my guests.

The woodlands evoke a special emotion from even the most jaded world traveler.  As we drove in from the airstrip, my eyes searched the jesse for any sign of life. It was September in the Valley, and bare stems and dry, brown curled leaves carpeted the thickets. The heat had sucked every drop of life from these stark stems, and not even the starlings stirred out here. We drove into the jesse, following the twin sandy tracks along the graveled road towards the old river bank and flood plain. In the distance, small figures loped characteristically to shade beneath startlingly green sausage trees. Baboons! Dappled copper moved off to the right… a herd of impala blending into the dappled shade of the Acorn Diospyros.

Elephant bulls of various ages wander slowly beneath the Winterthorn trees, their long trunks stretched out in front of them, searching for the coveted seed pods, which are full of protein, and therefore much sought-after at this drastic time of year when nothing else offers sustenance.  The bare ground of the floodplain is marked by hoof prints of every kind.  There is scarcely a square foot of ground that does not have a sign on it, and yet there is almost no greenery at all.  At this time of year, the Winterthorn are in full pod, objects of art, twisted stems the colour of corn with pink tinges, and rattling with seeds hidden in their stems.

Elephant bulls have developed the art of shaking the trees and causing the pods to drop, so that their prehensile trunks sweep and search for these delicacies, up goes their trunks and a blow of air as the pod is blown into an open, smiling mouth. Baboons, impala, kudu, eland, bushbuck and monkeys all eat these pods.  I don’t doubt the zebra have also had a go at times when the grass has been slow to grow!

The river supports large numbers of hippo, who reside in pods of up to twenty individuals or so, and their loud snorts and resonating grunts are part of the river ambience. Their trails, punctuated with large piles of scattered dung, wind across the dusty plain marking their time-worn routes away from the river and its safety. Hippo emerge at night to graze on any green grass they can find, returning in the early hours to the river and its cool retreat.  It is a matter of interest that the hippo of the Luangwa Valley in Zambia will eat fallen sausage fruit from the Sausage Tree, whilst elsewhere it is very rare for them to do so. I think it is due to the high numbers of hippo found in the river there, and the lack of grazing available in the dry season.

Mana has a fabulous feel to it and it changes with the seasons, but more on that at a later date.

September is a time of stress. It is hot, very hot (around 90 to 100F), dust hangs in the air in a perpetual haze, and huge flocks of queleas and smaller flocks of emerald green Zambezi lovebirds create dust clouds as they feed across the floor of the woodland.  The gnarled and ancient boles of the Winterthorn trees, bent and filled with holes from branches lost to time stand silent and waiting, laden with pods and all around them the sound of Meve’s starlings in their hundreds fills the air. These glossy birds are so common here, and often on walks one picks up their iridescent feathers.

Baboons are everywhere too. Troops of a hundred or so individuals are not uncommon and their distinctive lope or raucous screams are part of Mana. The loud barks of the males are part of the morning sounds in Mana, and woe betide careless campers who leave food around their tents! Vervet monkeys are smaller, and perhaps more delicate in their presence.  These monkeys are more versatile than many people think and are found in dense riverine forests, across the spectrum of habitats to semi-desert regions dominated by grasslands. Their small black faces and beautiful pale green to grassy brown coats blend well into the bush. They are the best leopard-spotters I know of, as they are ‘food’ for the spotted cats!

On one of our walks, we hear the staccato gibbering call of the monkeys and knowing that we are nearby, I told my guests to see which way the monkeys are looking. ‘Why?’, they asked. ‘Well, because they can see a predator and will be watching it!’… Try as we might, it took us ages to find the monkeys, and then to see where they were focused. Eventually after creeping quietly along, and me trying to keep everybody quiet and hidden (all eight of us), I found a big python sunning himself on top of a tree!  No leopard, but as much of a predator as the leopard. We all were amazed that the monkeys had been able to see the big snake from that distance.

The river is the lifeline of Mana, and apart from hippo and crocodiles no large animals live in the river. There is a variety of fish and water monitors, too. The Giant catfish or ‘vundu’ is found here and huge individuals of 100 pounds are known, but by and large barbel and catfish are the largest fish. The famous tigerfish, a flashy, very toothy predator, much favoured by sport fishermen is the largest fish predator and the most exciting to understand. The ‘Striped waterdog’ as its’ generic name translates, is a predator par excellence, on smaller fish than itself and even the 8 inch youngsters will fight gamely if caught on a wet fly. The largest fish I ever took on rod was a 12 pound ‘hen’ fish in a deep channel, from a canoe. We had to beach the canoe for me to land it safely otherwise the stumps in the river, and hippo herds we were dodging would have been too much for us to negotiate safely!

The Lower Zambezi around Mana is a maze of low sandy and muddy islands, ideal for wading birds and small crocodiles to frequent. Herds of Common waterbuck graze the short green grass along the river bank and on the larger islands in the river. Old buffalo bulls are always out here and either in small groups of two to ten their indomitable black bulky forms are to be seem feeding in the shallows or lying back to back ruminating quietly. The oxpeckers sitting on them or skittering over their recumbent bodies feeding on the ticks that collect on them.  Fortunately Mana has few enough of those.

The birdlife here is fabulous. For birders a walk through these old Acacia woodlands is very rewarding and I often would create a ‘transect walk’ from the jesse thickets and mopane woodland to the river, lasting several hours, with interested guests to see what we could ‘collect’. The lists were always impressive and informative. Naturally this also included a wide assortment of wildlife too. Elephant cow herds would emerge from the woodland, and cause us to pause or quietly move away downwind so that we did not give ourselves away. The cow herds in dry season were to be avoided as they get very aggressive, and although I was armed, I did not want a ‘shoot out’ on a walk. Woodpeckers, shrikes, flycatchers, various seed-eaters, raptors, hoopoos, sunbirds and sundry insectivores would all be exciting to find, observe and mark down on our steadily increasing lists.  The later the morning however, the quieter the woodland became, except for the starlings of course. When we reached the river bank, then our scores would increase again and we would rest in the shade of a Natal mahogany. Tea would be served with fruit or a fresh-baked scone or crunchy biscuit! The view over the river was serene and a place of peace for me. 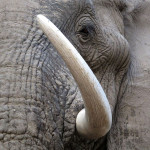 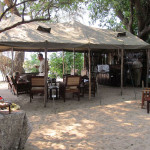 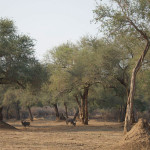 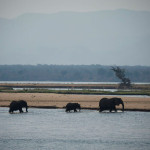 Midday traffic in the Zambezi 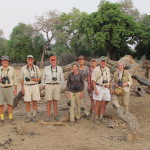 My guests on their first walk in Mana