Comments Off on Go North, friends…to a green river. There you will find it..the Namaqua Chameleon! 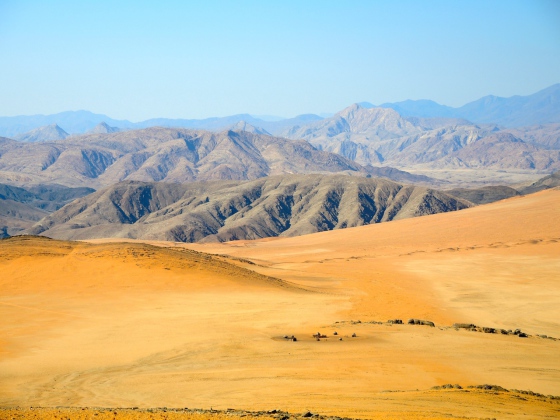 Go North, friends…to a green river. There you will find it..the Namaqua Chameleon!

The landscape of Namibia is a geologists paradise. With no soil overburden, all is revealed to the learned and the unknowing. Miles upon miles of rock of fifty different shades and hues lies wind-scultpured or shattered by the forces of time, up tilted and folded, riven through with veins of quartz and coiling magma dried to colors only seen here. Then reddish sands color the plains after the veil-like dendritic drainage lines marked by shrubs form a net thrown carelessly over the plains, stemmed from the gap between hills. Eventually the smokey grays and blue hued mountains rear up marking the boundary of Angola, and the jade green Cunene river, the border of Namibia and Angola. Serra Cafema lies hidden in a grove of Winterthorn, on the southern bank of the river. We spotted a family of meerkats on the way across the plains, they watched us warily, ready to bolt to safety if we should prove hungry!  On our first morning the sea fog which had crept in during the night, we watched it as it slowly withdrew like smoke before a wind. 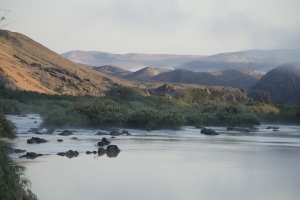 The fog is lifting out of the valley.

The Hartmann Valley (yes, the same man whose name the Mountain zebra enjoy) is a massive bowl-shaped valley about six miles long, and we drove across and over the edge along the high ridge, that is the southern river boundary. It is about 1000 feet above the river, and we descended on a sandy track, at times at an angle of probably 70 degrees! Scary stuff. The road wends it’s way through rocky ridges and hills of sand, and finally a rocky track on the very edge of a precipitous gully drops onto the river level, and one breathes a sigh of relief.

It was from one of these high ridges that I took the photograph of the mountains in Angola, with the Himba village in the foreground…..seen only as tiny brown shapes, with a dirty smudge around them. 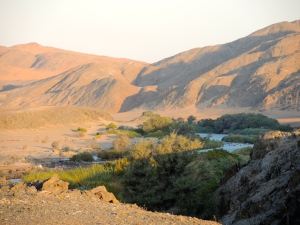 View from downstream side. The camp in the trees, well hidden and very private.

We visited the local Himba village, and found a few women there and scattering of children, but no men. This is usually the case in the dry times, as the men take the cattle and head off to find grazing. We spent some time there talking to one of the adults. She had survived a crocodile attack in her youth, and her chest bore the scars. We later took a boat trip, and followed the Cunene upriver for some distance and photographed a number of large crocodiles and some babies too. The river had a number of mild rapids which we negotiated successfully, stopping on a convenient sand bar ‘on the other side’ for a refreshment break. The jade coloured water meant very few water birds as the water is clearly not clear enough for many piscavorous species. 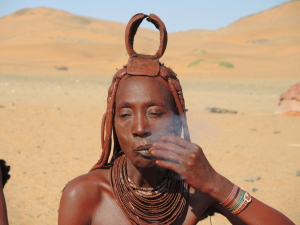 “Crocodile” enjoying a deep draw on her pipe.

We took the vehicle one day and drove out of the valley, fighting and grinding our way up and out of the valley, onto the plateau. Small groups of oryx foraged on the dry tufts of grass, roots exposed by the scouring wind, they lovely gray coats with white stockings at such contrast to the local conditions. What amazing animals they were!  The starkness of these plains is unique here, even in Namibia. Yet these animals and springbuck too, find a way to make a living. They glean the smallest greenery from the tufty grasses, nurtured by the sea fogs that come in, and their graceful and stately forms are seen in the remotest areas. 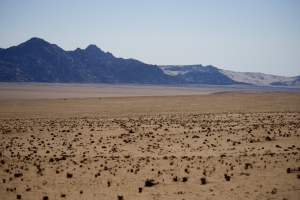 We spent one afternoon on quad bikes riding the winding roads and sand expanses on these fun machines. Madison had a small spill, but after shaking herself down jumped back on her bike and we carried on.  It was a very lucky afternoon, because the guide found a Namaqua chameleon……the holy graille of all reptile enthusiasts!  We watched him walk delicately and deliberately from stone to stone, eyes swivelling this way and that, scanning for sand snakes that eat tasty chameleons! 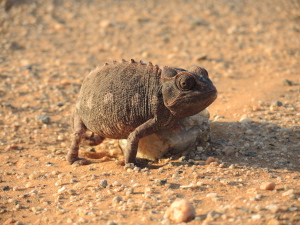 Namaqua chameleon in it’s own habitat. The desolate gravel plains of Namibia.

The wind would blow every afternoon and it was better to be sheltered somewhere in the mountains or away from the dunes….except on our last afternoon when we ventured into the heart of the dunes at the bottom of the Hartmann Valley. What an experience! 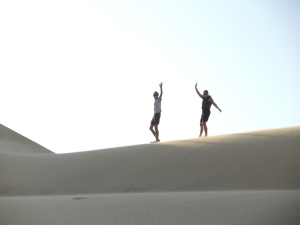 The wind was strong enough to obliterate our tracks in minutes.

← The Dunes, oh those dunes.
The Mara Experience →