Comments Off on Elephants on the rocks? 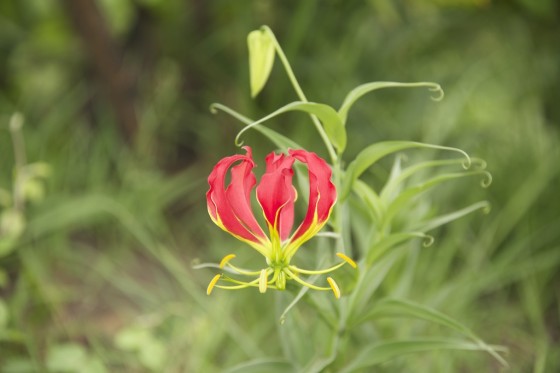 Elephants on the rocks?

Today was our last day in the Serengeti, Kogatenda area, and so we left early.

After a great breakfast we drove at a steady pace, just enjoying being here.  What a pleasure to be out and about with no pressure to see or be somewhere specific.

I spotted some freshly opened Flame lilies (Gloriosa superba) and we spent an absorbing fifteen minutes looking at them, and trying to collect the best photo of them. Such beautiful blooms. The national flower of Zimbabwe, I informed everybody.    Further along we found several newly born topi, and watched the nervous mothers leading the wobbly-kneed babes away. Actually I think they were at least a few days old, but they were very small.  A Long-crested eagle sat atop a stump, his long crest feathers blowing and waving in the morning breeze.  We also found an immature Martial eagle sitting in a fig tree, just quietly watching the rock-strewn slopes below him. His snow white breast blended in remarkably well with the yellowish leaves and pale trunk of the ‘rock-splitter fig’.

Rock hyraxes squatted on some rocks waiting for the suns’ rays to reach them. One very small fellow tried hard to cuddle with an adult (his mother?), even reaching up along her back from behind in its’ efforts to get warm! She ignored him.

As the vehicle rounded a bend there was a whole herd of elephant feeding and interacting amongst the boulders on the sunny slope before us.  One particular cow with a small calf was standing on a large boulder, feeding on an unlucky sapling, and her calf decided to slide down the edge of the boulder, which had everybody in soppy smiles at its’ antics. It then climbed back up again and endeavored to suckle. As the cow was on the slope, and the calf want that side to suckle, it could not quite reach. Eventually she gave in and backed off to more level ground and the calf latched on very quickly. 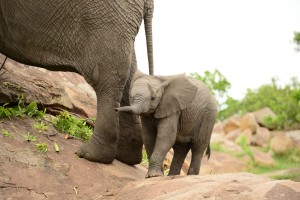 Hey mum, I’m just behind you.. 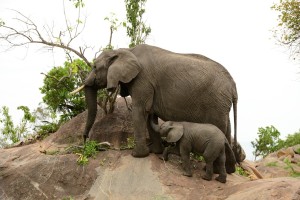 Two pairs of young bulls were sparring further down the slope, and we watched all the trunk wrestling, pushing and shoving with knowing smiles. They do have so many human behaviours. A very young bull calf tried half-heartedly to join in but backed off when he nearly got pushed down a slope by a much bigger calf. One of the five year olds did get pushed over (without trumpeting) and eventually after being shoved and heaved on his face and side clambered up and carried on the contest! They were a lot of fun to watch.  We started the vehicle and carried on slowly, careful not to disturb them.

We spotted some lions in the granite kopjies there, and eventually located two big males and two females sleeping on the rocks high up under some branches. Cats do know how to be comfortable!

Herds of wildebeest, zebra, topi and Cokes’ hartebeest seemed particularly prolific this morning. The grass was thickening by the day, and they were nose down and munching very busily. Yellow hibiscus, orange Crossandra and white ‘Tissue paper” flowers had emerged, creating islands of flowers amongst the green sward.  There was a wildebeest carcase (possibly a month old) lying amongst the white flowers in a macabre thumbnail cameo. The nutrients released by the body proteins had fed the grass immediately around the body, and it had created quite a picture. Later that morning we photographed a Yellow throated longclaw feeding on the fly larva in an old carcase……..another strange setting for a great picture.

Stephen was doing well, and we had been thoroughly enjoying the drive when he suddenly pointed forward and said, ‘Leopard!’.  We all stared and finally saw the cat. She (we saw later it was a she) was lying along a branch in the time-honoured manner of elusive leopards, the tail in an ‘umbrella handle’.  We all took a quick picture and then our time was over. She sat up and slid down the trunk into the undergrowth. We stared in horror….damn!  Quickly seizing the initiative, we drove up and then spotted her slinking away to the right. We followed at a distance, understanding that she was shy and when she disappeared, anticipated her move, and by driving parallel to her direction, located her again sitting down next to a tree trunk. Something had baulked her, and she was watching whatever it was!

She glanced briefly at us, and sat staring down in the bushes. 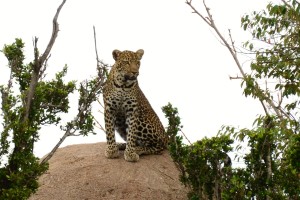 She eventually sat and watched us…

She moved off again, and this time we let her go.  As we moved away however, she appeared on top of a large boulder, facing away from us, watching some giraffe. We stopped and watched her from about 150 yards. She was relaxed. Sat up and watched us, then lay down, sat up, yawned and watched us curiously, giving no sign of nervousness at all. We immortalized her digitally, and then she jumped down and sauntered away towards a thicket.  We slowly drove away, seeing her again looking at some rock hyraxes who had not seen her.  As we carried on, we also surprised a Kirk’s dikdik who lived in that thicket. Linda was very happy with this find!

Time for coffee and biscuits.  We found a great spot amongst some flat granite rocks with views that went forever.

Klipspringers and oribi were another two small antelopes that saw on numerous occasions. The klipspringers in this area happen to show something particularly interesting. The females have horns, and in other regions, do not! There were two animals at one point, both females, feeding down on the grass, both grazing and browsing…another first for me!  The photo just shows two teats on her belly. The oribi here are very visual, and their orange-brown pelage is at odds with the verdant green of the new grass, so finding them was easy as they relaxed, lying in the grass. Groups of up to five at a time were not uncommonly seen. 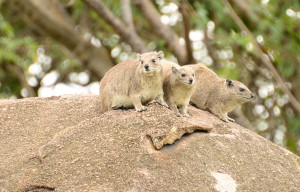 Rock hyrax waiting for the sun…. 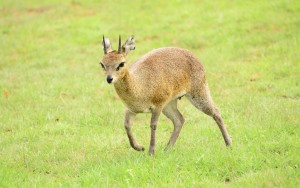 Lunchtime found us under a large tree near the river, from where we could here the snoring grunts of the hippo and see Ruppells’ and other vultures landing and taking off. Lunch was a mix of fresh veges, chapatti flapjacks, stir-fried chicken, beef and fresh orange for desert.  Cold beer and/or water washed it all down.

The river was running well, and the scenic rapids and palms hid the carnage that had happened here a few days previously. The stench of death and decay drifted over us from time to time, making Jane cough involuntarily. Wildebeest carcases were everywhere, lodged amongst the rocks. The vultures were feeding on the ones that were within range of the birds, and marabou storks were scavenging too.  A spotted hyena had come down to feed on a carcase in the shallows, behind a big rock. Several big crocodiles were found basking amongst the rocks, their scaly bodies drum tight from the feast!  We surveyed the scene for a few minutes and then drove down river leaving the cloud behind us.

We had had an incredible day so far, and it was time to head home.

That evening, we had sundowners just a 5 minute walk out of camp and all the staff were there, having lit a bonfire and put up a bar table too, with drumstick snacks, popcorn and crisps. The champagne flowed freely. It was a fitting finale to out stay, as we left the next morning for the Ngorongoro Crater.

The staff sang to us as we left…..’Jambo, Jambo Bwana…habari gani?…